Eyal has spent much of his adult life in the high-tech industry, primarily in the network and real-time communication. Once he graduated (MSc) from Middlesex University, Eyal began working as a developer and later became a technical product manager for successful high-tech start-ups before going to work for AT&T to lead their Real Time Communication Development. Eyal joined Carbyne in 2016 to develop their North American and Latin American operations. With his security and technological background, he has a unique understanding of the challenges facing emergency services and of the opportunities for technology to surmount them.
Eric Hagerson, Principal Manager, Federal Regulatory Affairs, T-Mobile USA

Eric Hagerson has over 16 years of experience in the telecommunications industry. His career background in the field is varied and includes network design and implementation, contract negotiation and vendor development. Mr. Hagerson has consulted on interconnection and intercarrier compensation issues and was T-Mobile’s representative to the Intercarrier Compensation Forum. He played an integral part in T-Mobile’s federal AWS-1 spectrum clearing efforts which achieved early access to nearly all of the company’s $4.2 billion in AWS-1 licenses; as a result of this work, he was awarded the T-Mobile Summit Award.

Karima Holmes was appointed by Washington, DC Mayor Muriel Bowser to serve as the Director of the Office of Unified Communications (OUC) in January 2016. OUC consolidates the emergency 911, non-emergency and basic city service 311 call activities from the Metropolitan Police Department (MPD), DC Fire and Emergency Medical Services Department (DCFEMS) and the Mayor’s city services call center.  The operation serves as the only Public Safety Answering Point (PSAP) in the District of Columbia and is responsible for the public safety communications infrastructure that ensures police, fire and emergency medical dispatch for its almost 700,000 residents, including support of the Secret Service and all presidential movements, while maintaining radio interoperability with public safety entities across the National Capital Region.  The OUC handles a combined 3.1 million 911 and 311 calls and 12 million push-to-talk transmissions annually.

Just prior to her appointment as OUC Director, Holmes served as the Managing Director of the Southwest Regional Communications Center in Texas, which includes PSAPs for the cities of DeSoto, Duncanville, and Cedar Hill, Texas. While there she also served as the chief spokesperson for the center.

A highly sought after public speaker and subject matter expert, Ms. Holmes has represented the 911 industry in a variety of forums including national public safety communications conferences, special topic task force work groups, as well as on Congressional panels, covering topics ranging from emerging trends in NG911 and operations best practices to women in leadership.  She was also recently recognized as Director of the Year by the Mid-Eastern Chapter of the Association of Public Safety Communications Officials (APCO).

Director Holmes also currently serves as the Vice Chair of the Metropolitan Washington Council of Governments (MWCOG) 911 Directors Subcommittee and as the District of Columbia’s state representative with the National Association of State 911 Administrators (NASNA) as well.

Doug Kesser brings more than 18 years’ experience in telecommunications to his role as director of sales for Comtech’s Safety & Security Technologies division. At Comtech, he is responsible for sales and business development for the wireless 9-1-1, VoIP 9-1-1, location, and NG9-1-1 product portfolio. Doug works with customers of all sizes, participates in various groups on Text to 9-1-1 and NG9-1-1 planning, and holds 14 patents.

Doug earned his Bachelor of Science in Electrical Engineering from Penn State University and a Master of Business Administration from Rutgers University. He is also a veteran of the United States Coast Guard, where he performed various search & rescue and law enforcement duties.

John Lawson serves as Executive Director of the Advanced Warning and Response Network (AWARN) Alliance, a coalition of leading broadcasting, consumer electronics, and public safety organizations that is developing an advanced emergency alerting system for the U.S. APCO and other major alert originators are members of the AWARN Advisory Committee. He’s also President of Convergence Services, Inc, a consulting firm focused on Next Generation Television.

John has served as President and CEO of the Association of Public Television Stations, Executive VP of ION Media Networks, and Executive Director of the Mobile500 Alliance. He served on the boards of the National Association of Broadcasters and the Open Mobile Video Coalition. He was one of four signatories to the original Joint Petition in April 2016 that led to FCC approval of Next Gen TV in November 2017.

In June 2017, John was appointed to FEMA’s National Advisory Council, Integrated Public Alert and Warning System Subcommittee. He was an expert panelist at the White House Earthquake Resilience Summit in February 2016 and has been appointed to three FCC homeland security advisory committees. John earned his BA and MA in International Studies at the University of South Carolina. He’s currently enrolled in FEMA’s Emergency Management Executive Academy.

Ray has been involved in public safety for over 40 years as a Fire Chief in Baltimore, SME for several Systems Integrators and as Maryland’s SWIC/SPOC. He also represented the National Governors Assoc. on the PSST prior to the creation of FirstNet.

Ray led MD as the first State to conduct their Initial Consultation with FirstNet which became the model for future sessions across the country. He has now embarked on a consulting career focused on insuring the NPSBN becomes a reality and meets the needs of our first responders.

Tim Lorello is President & CEO of SecuLore Solutions, a cybersecurity firm focused on protecting our nation’s most important number: 9-1-1. Prior to SecuLore, he spent 21 years at TeleCommunication Systems and 11 years at AT&T Bell Labs. As CMO at TCS, he pioneered 9-1-1 initiatives for wireless, VoIP and NG9-1-1. He has spoken on 9-1-1 topics at APCO, NENA, IWCE and at the FCC. He holds 20 patents, a MSEE from Northwestern University and a BA in Physics from University of Chicago.
Steve Malkos,Technical Program Manager, Google, Inc.

Mr. Malkos is the Technical Program Manager in the Android Location and Context Group at Google. He manages all engineering aspects for Android’s Location and Context programs. Mr. Malkos is responsible for defining these initiatives within Google which includes everything from Emergency Location Service (ELS), GPS, Fused Location Provider (FLP), Android Sensor Hub, Sensors, and more. Mr. Malkos has been involved in the field of location for over 15 years.

Prior to his role at Google, he worked as an Associate Program Management Director at Broadcom, where he managed engineering teams within Broadcom’s GNSS software. He holds a B.S. in Computer Science from Purdue University and currently holds 8 patents in the field of location.

Dave Mulholland serves as the Administrator of the Arlington County (VA) Emergency Communications (911) Center. His 29 plus years of public safety experience includes serving with the District of Columbia Homeland Security and Emergency Management Agency as the District’s Statewide Interoperability Coordinator and with the United States Park Police (retiring at the rank of major) with twelve years of management and oversight of the United States Park Police primary and secondary PSAPs.

As CEO of FirstNet, Mr. Poth oversees one of the largest public private partnerships, which is building a nationwide $50 billion broadband network that will covering 99% of the population and create tens of thousands of new jobs. Mike began his career in public safety with the Tempe, Arizona Police Department where he held various positions in patrol, traffic, detectives, narcotics and the tactical team. As a Police Captain in Corvallis, Oregon, he held executive assignments leading three different bureaus including the regional 9-1-1 center. Later, as technology senior executive at Northrop Grumman and Hewlett Packard, Mr. Poth focused on cyber security and IT services and led mission critical public safety projects for state and local police, fire, and emergency management services agencies
Alex Rafii, Federal Manager, FirstNet Program, AT&T

As the Federal Manager for AT&T FirstNet, Alex manages a team that is responsible for outreach to detail AT&T’s innovative solution building out the First Responder Network Authority’s National Public Safety Broadband Network. He leads events, discussions, and trainings on network plans, security, ICAM, deployables, and other topics related to FirstNet. Alex has more than 20 years of experience in technology, including hardware, software, mobility, and wireline connectivity serving Public Safety, Government, Federal, and Commercial segments. He has a BA in Economics from the University of Virginia and resides in Fairfax, VA.
Steven Raucher, CEO, RapidDeploy

Before working in public safety, Steven had a 20-year career in the banking sector, where he was involved in IT programming – designing trading systems and living between New York and London.

In 2015, after suffering a personal tragedy, Steven trained to become a first responder. He wanted to help others in the front line. Not long afterwards, he jumped at the opportunity to become CEO of RapidDeploy. And he has been travelling the world, showcasing this incredible public safety solution ever since

Randy chaired, co-chaired and is participating in a number of NENA, APCO, NPSTC, NFPA and TIA TR8 Project 25 standards and requirements committees. Randy is a licensed Professional Engineer.

Dr. Spears-Dean is a communication and technology professional with over twenty years of experience, possessing extensive knowledge of public safety technology issues affecting state and local governments. She holds a Ph.D. in Public Policy from Virginia Commonwealth University, an M.B.A. from the University of Richmond, and a B.A. from the College of William and Mary. Currently, she is employed by the Virginia Information Technologies Agency as the Public Safety Communications Coordinator and is responsible for managing the Commonwealth’s 9-1-1 program and leading Virginia’s statewide NG9-1-1 deployment.

As a public safety practitioner and administrator, Dr. Spears-Dean has served in a variety of capacities. Currently, she is an appointee to the Federal Communications Commission’s Communications Security, Reliability, and Interoperability Council (CSRIC). Dr. Spears-Dean has also served as a National Association of State 9-1-1 Administrators (NASNA) Board Member and a subject matter expert for several United States Department of Homeland Security work groups. Finally, she is an accomplished author and presenter.

Nicola Tidey, RPL ENP (VA APCO International Executive Council Delegate) is the Director of the Orange County Emergency Communications Center. She has been in public safety for 18 years, starting as a volunteer firefighter/EMT and then in 2004 joining the communications field. During her career, Nicki has worked her way through the ranks serving as CTO, Supervisor, Training Coordinator, and now as 9-1-1 Director. It’s through these diverse roles that Nicki has been able to be actively involved in not only Virginia APCO but APCO International.At the International Chapter level, Nicki has served on various committees over the years, and currently Chairs APCO’s Standards Development Training Committee as well as being a member of the Standards Development Committee, the Occupational Analysis, and the Conference and Exposition Committee. Her home is in Bealeton where you will find her CrossFitting or hanging out on her 11 acres with her family and 2 dogs and chickens who are lovingly named after MASH characters. 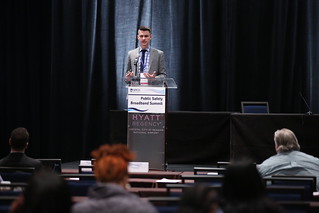